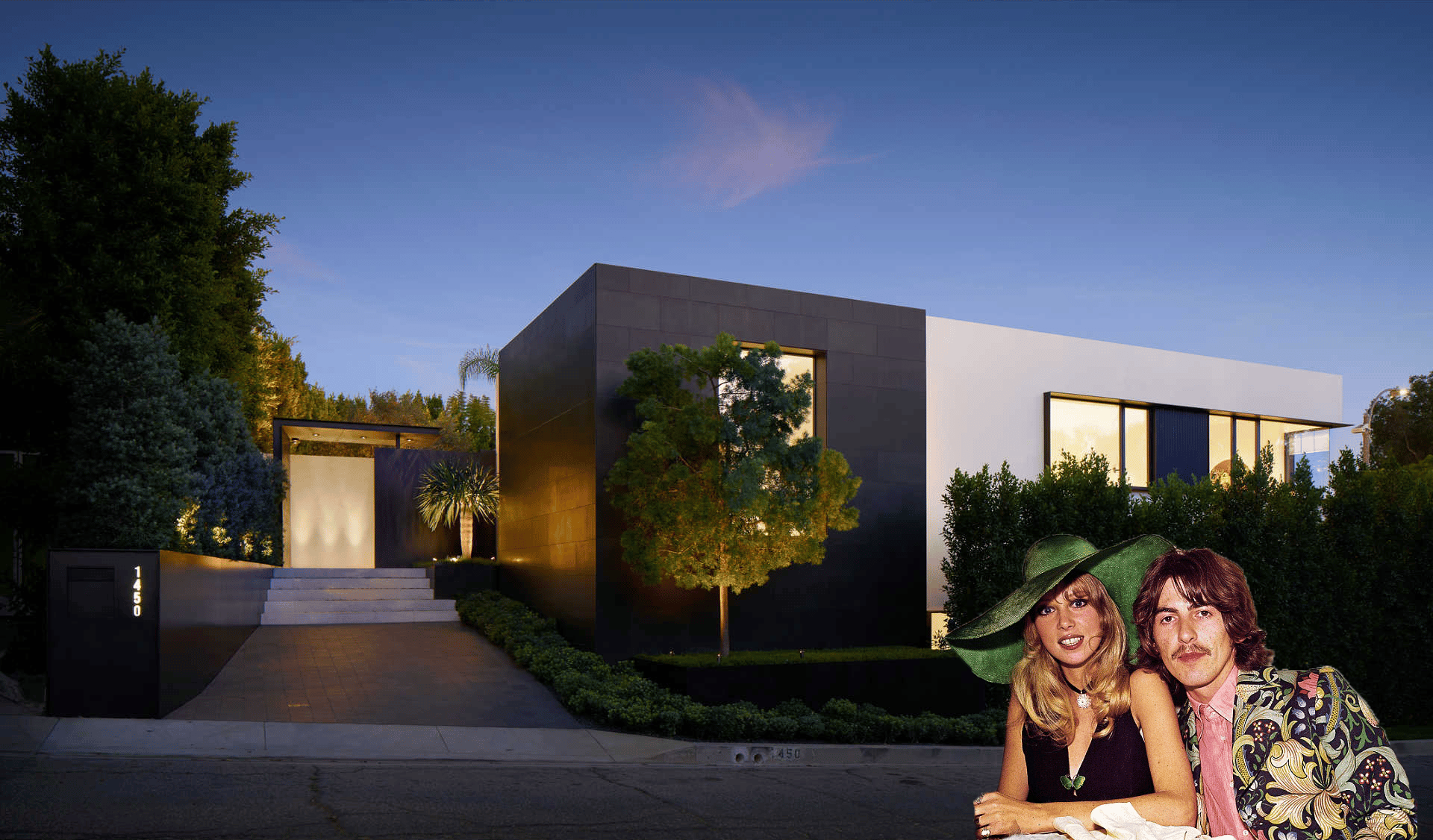 Listing of the Week: 1450 Blue Jay is The Belle of The Bird Streets

Have you ever wondered who gets to name the streets?

Here in Manhattan it’s easy to imagine a group of bearded men (it was a different time…) in vests throwing up their hands after running out of creative street names and just using numbers.

In early 20th century Los Angeles though, it’s easy to imagine street naming was done with a bit more… panache.

Anyway, late one sunny afternoon they likely had a breakthrough, naming wise:

“Why, yes. That sounds quite lovely indeed. Birds it is.”

The rest might have been history, but it would take another 40 years and another mustachioed man to truly immortalize the newly christened “bird streets”.

After a decade of honing his talents with the best band in the history of the world (is this even really in debate any more?) George Harrison spent a lone night waiting for a friend in a rented house on Blue Jay Way. For company, he was left with staggeringly beautiful views of the city below, and the lingering effects of a certain perception-altering Swiss chemical.

Today, almost 50 years later, the combination of jaw dropping physical beauty, cultural cache, and rarity have made the bird streets all but irresistible for Hollywood’s elite.

We’re not going to name names here, but let’s just say that if you buy this house there’s a more than fair chance the neighbor you run into while out walking your dog has an Oscar, a Grammy, or both. 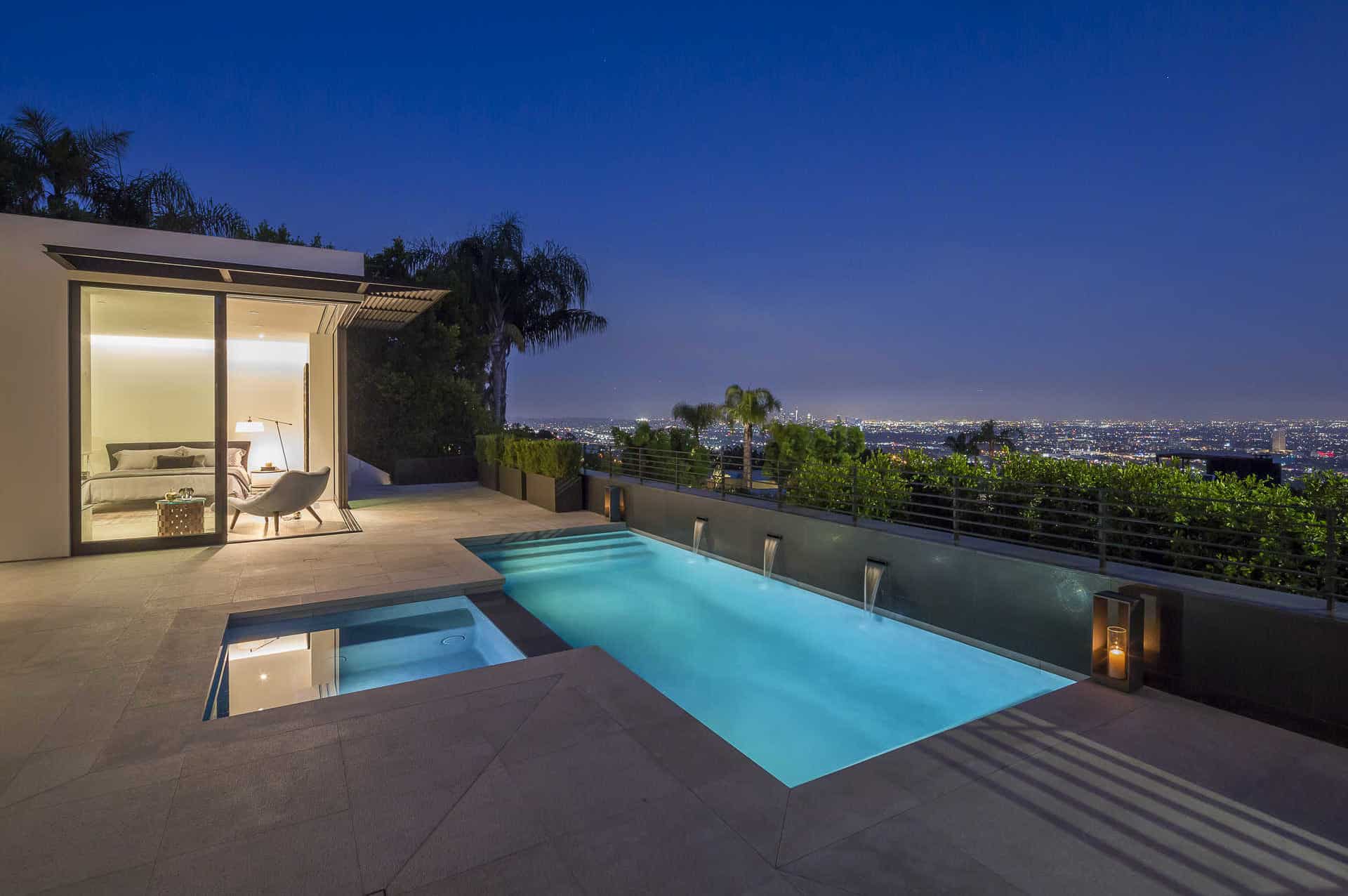 With “only” a little over 6,000 square feet of living space, there are certainly larger, more opulent homes in the bird streets we could have picked for our listing of the week.

We didn’t though. Here’s why.

The ugly secret of a lot of the pretty mansions in The Hollywood Hills is that… well, they’re not all that pretty. The more you look, the more subtle flaws you notice.

The “look at me!!” odd angles and walls of glass start to grate on the senses a lot sooner than you might think. It’s as if you can hear the developers’ nervous phone calls wondering if the third outdoor fireplace was “insta worthy”.

I know, I know, this has become something of a cliche around here, but like any good cliche, it’s also true.

If you want to find out for yourself, head to an open house and just sit in one for 20 minutes.

Now imagine actually living there. I’ve got $20 that says most of you would swipe left after 15 minutes.

So that’s why we’re at 1450 Blue Jay Way today instead of somewhere else. It’s not the biggest, it’s not the most opulent, but it is in a word, perfect. 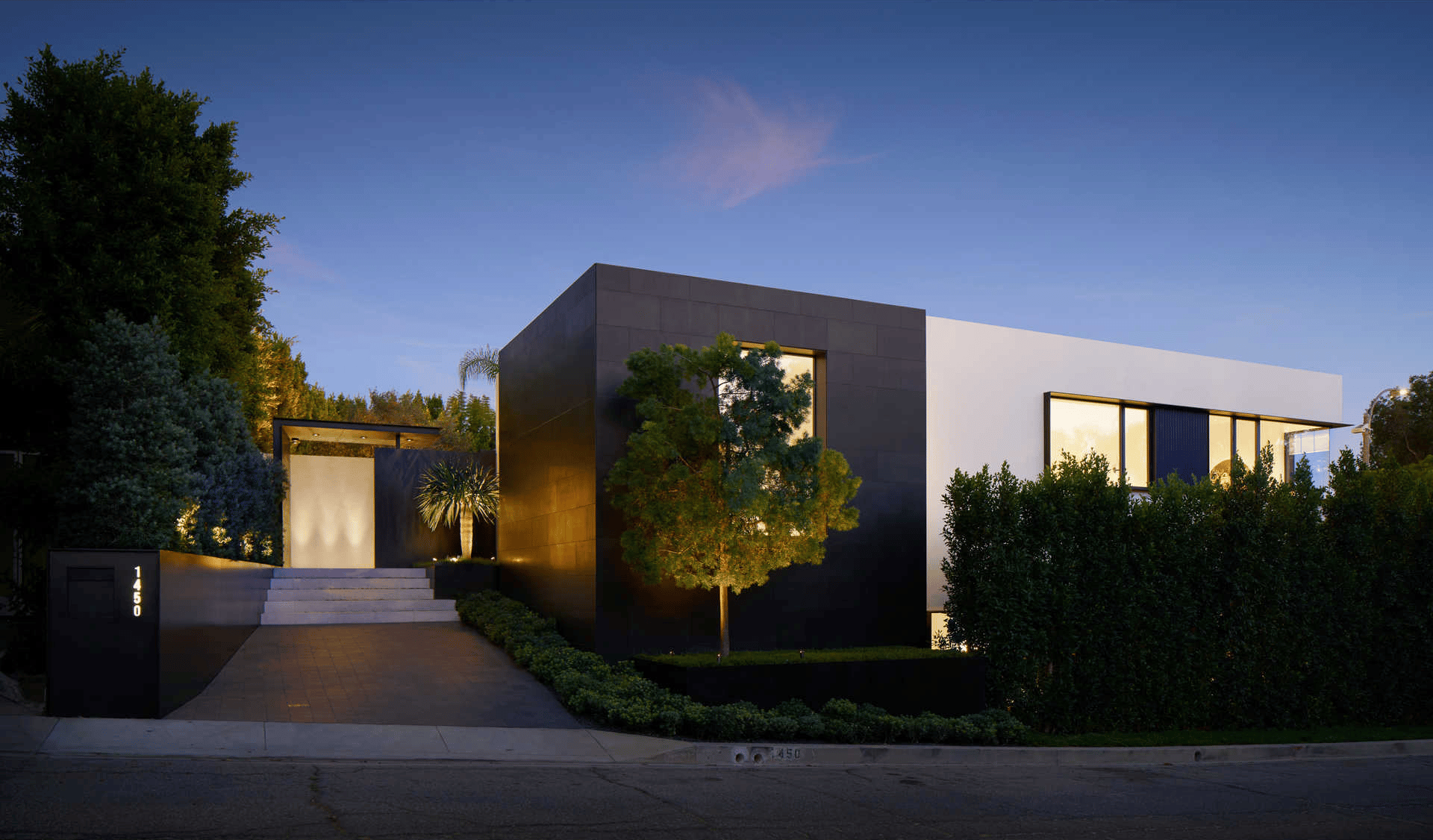 From the street, 1450 Blue Jay cuts an imposing, but welcoming figure.

The monolithic dark stone-clad shapes you’re first presented with give way to a just barely obscured, and far more traditional for the neighborhood, white box with tall windows.

But is the beauty here just skin deep?

Let’s go inside and find out. 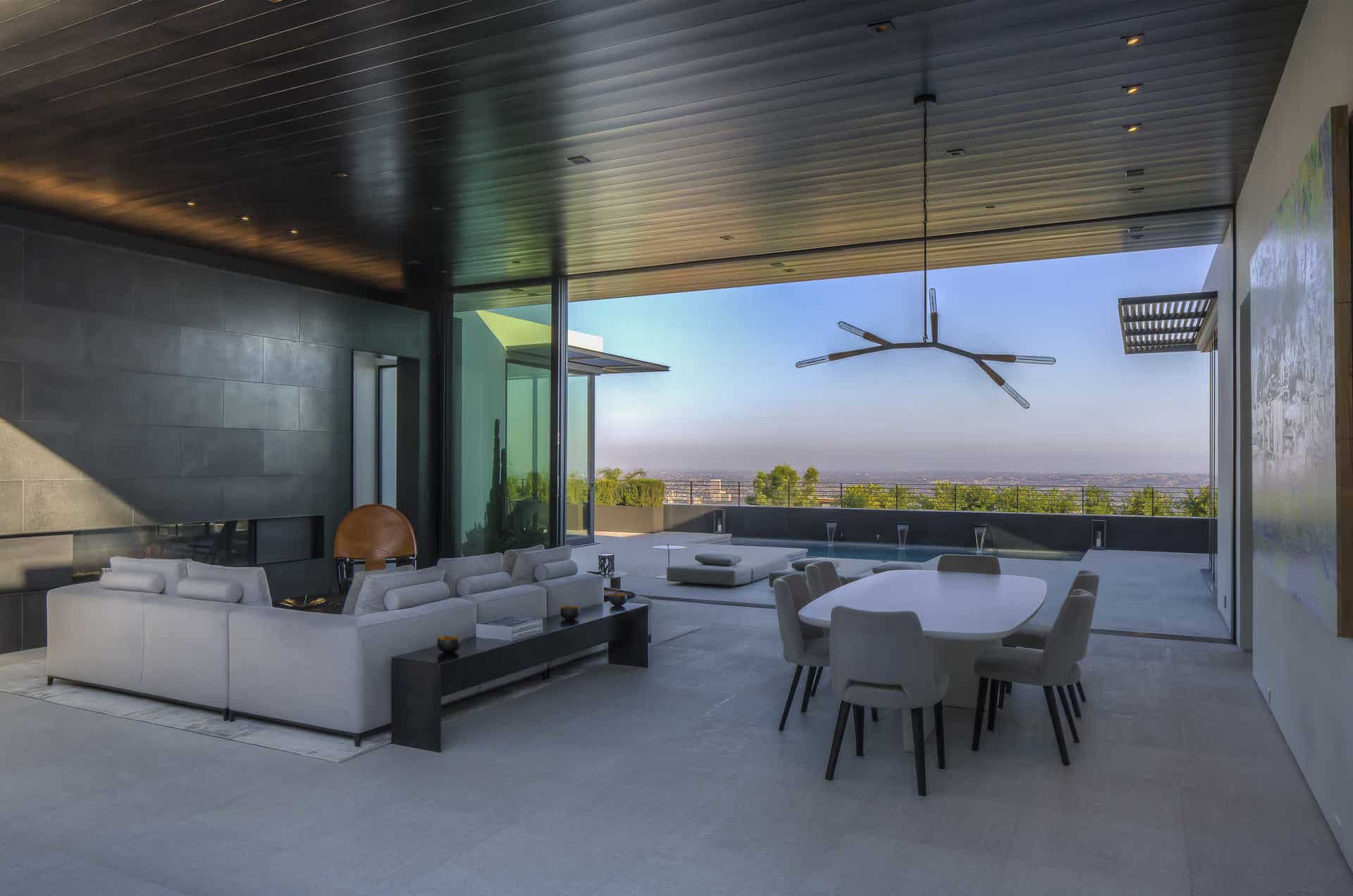 The answer is no. Far from it.

The main space continues the dueling architects theme with more elegant dark stone (or maybe zinc?) Tile walls and teak colored wooden ceiling. A welcome respite from the blurry eyed white and beige dreariness of so many modern LA mansions.

They layout is pretty great too.

Like seemingly all the newer homes in this range, the rooms flow into both each other and the outdoors, but here the sense of scale feels much more natural.

More like a cohesive unit rather than a series of rooms.

You can almost imagine architects scratching their heads about what to do with yet another 2,000 square feet of blank space. Ask any artist: restrictions are often what makes great art great. This applies to architecture as well.

Let’s check out the den. 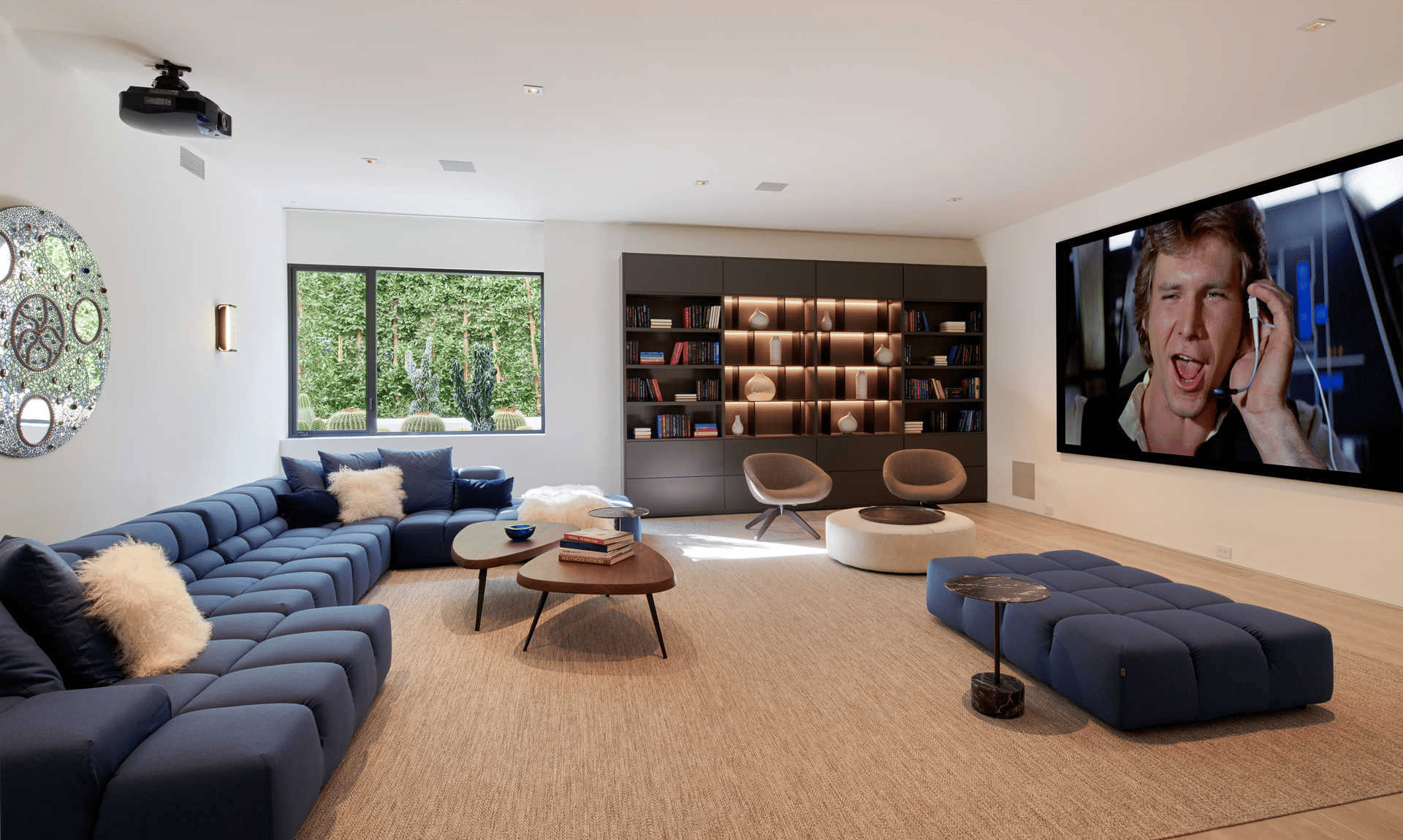 Then we have the window that frames the garden like a painting, and has just the right amount of architectural drama. It feels like an inch or two in any direction would spoil the look. 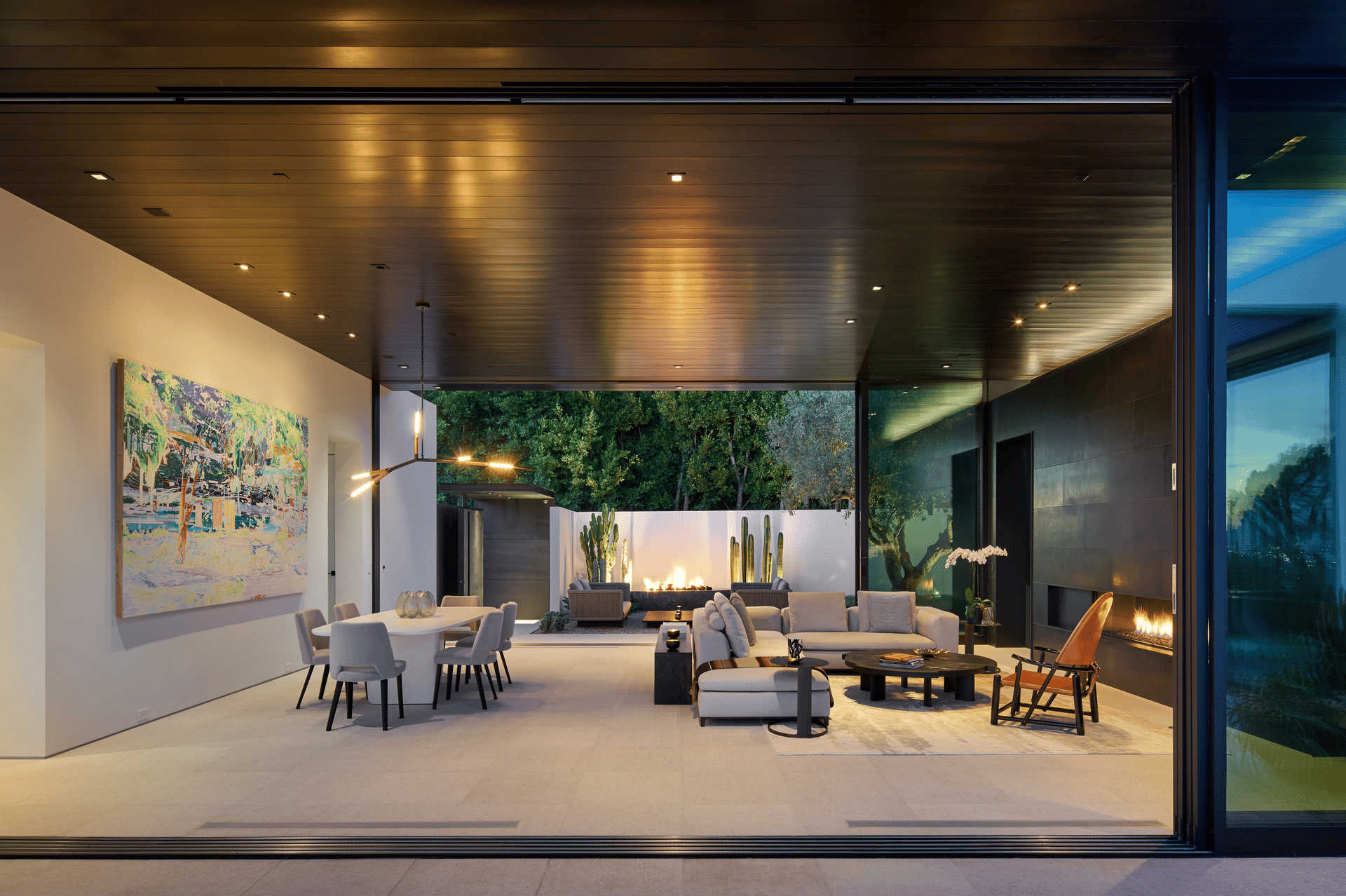 Looking in to the main living area from the terrace somehow makes the place look even more dramatic. 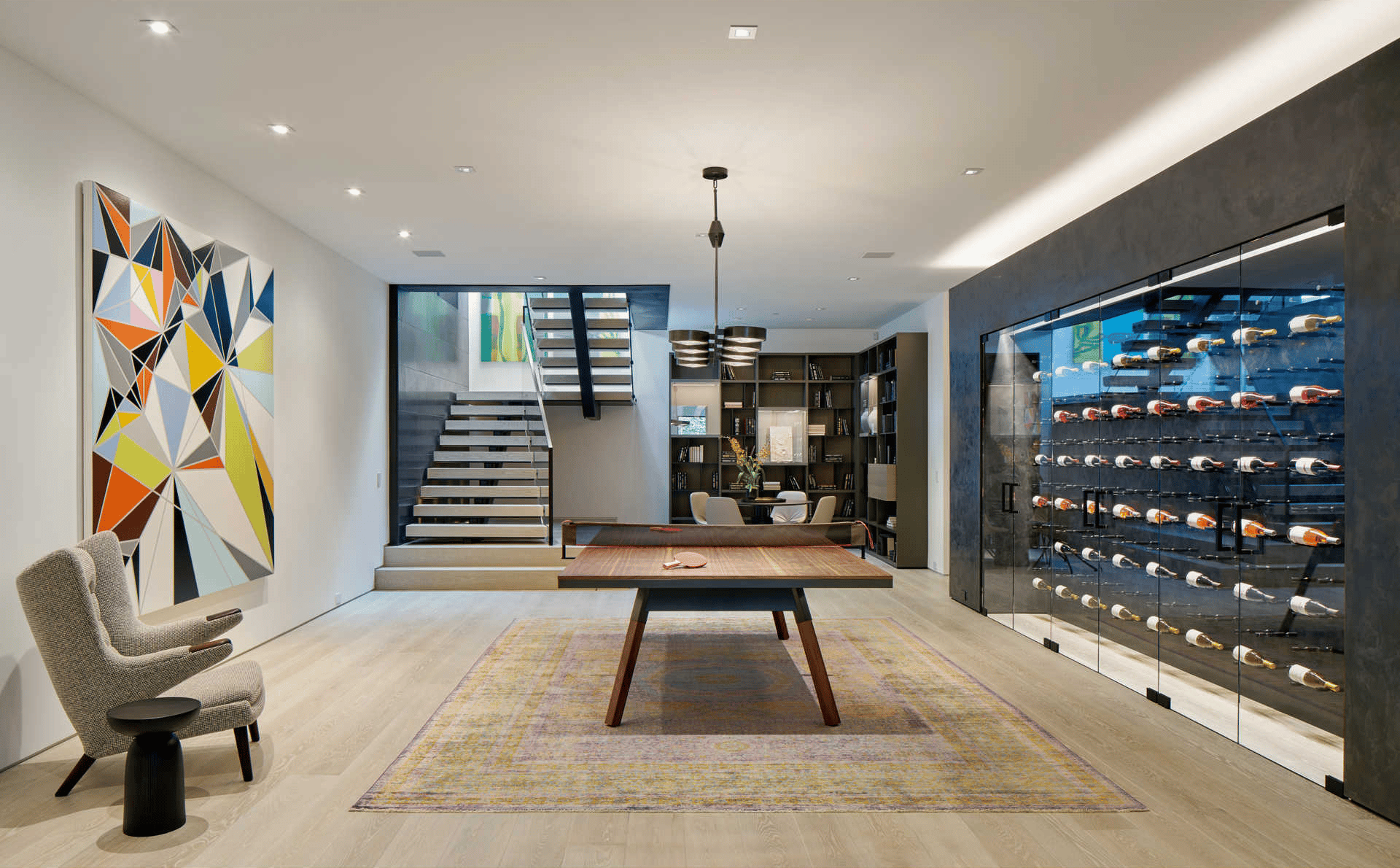 Downstairs we have yet another amazing space. The staircase looks like the architect spent some quality time at The Whitney Museum in Manhattan and added just a hint of an odd angle to keep things fresh.

Of course, being closer in age to George Harrison than Harry Styles, the first thing I would do would be nix that ping pong table and put in a 12 foot dining table… Everything else can stay.

Wait, we haven’t even gone outside yet… 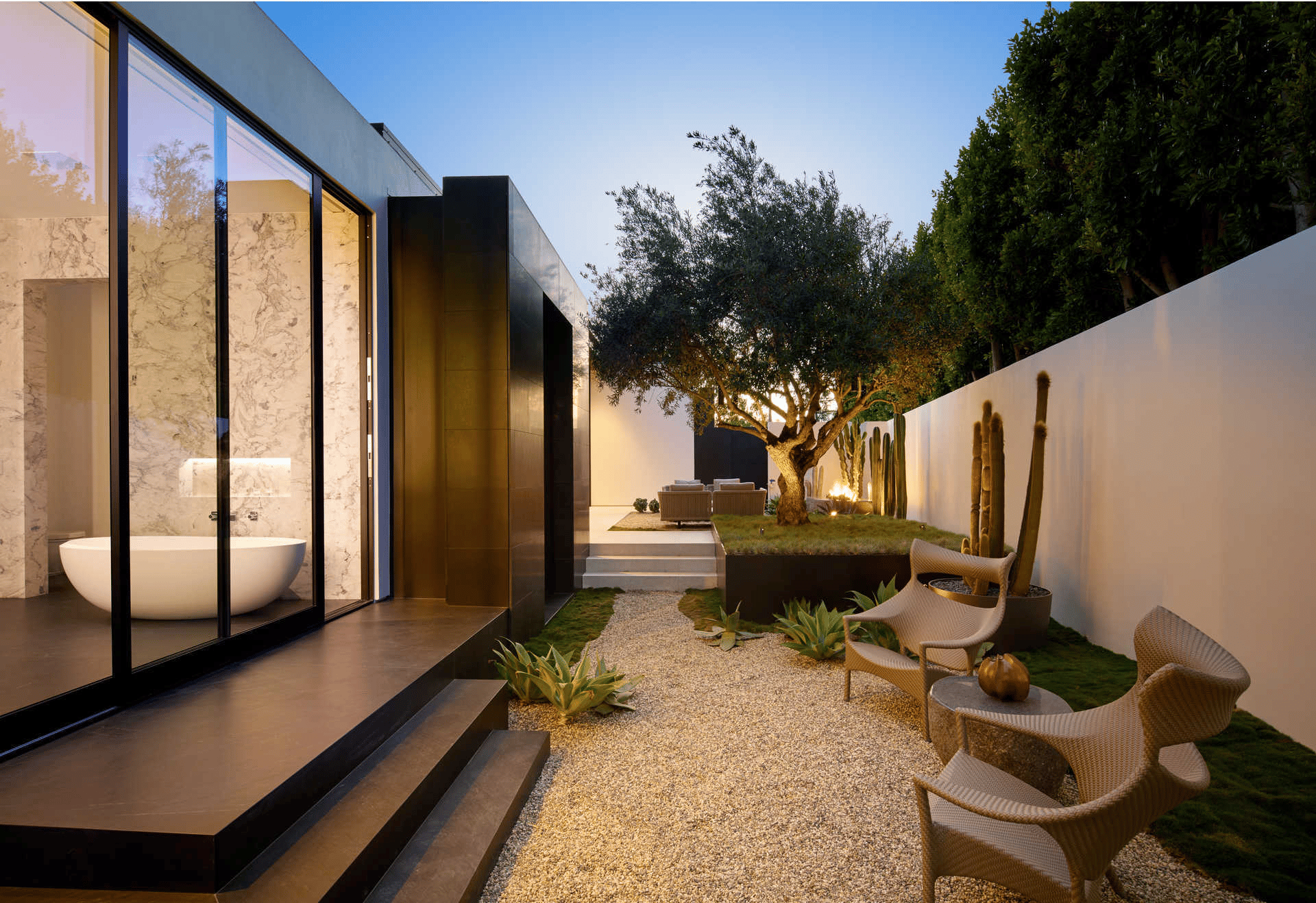 You know when even the picture of your side yard looks like a work of art that you’ve bought the right house.

That’s the master bath there on the left. Let’s take a peek. 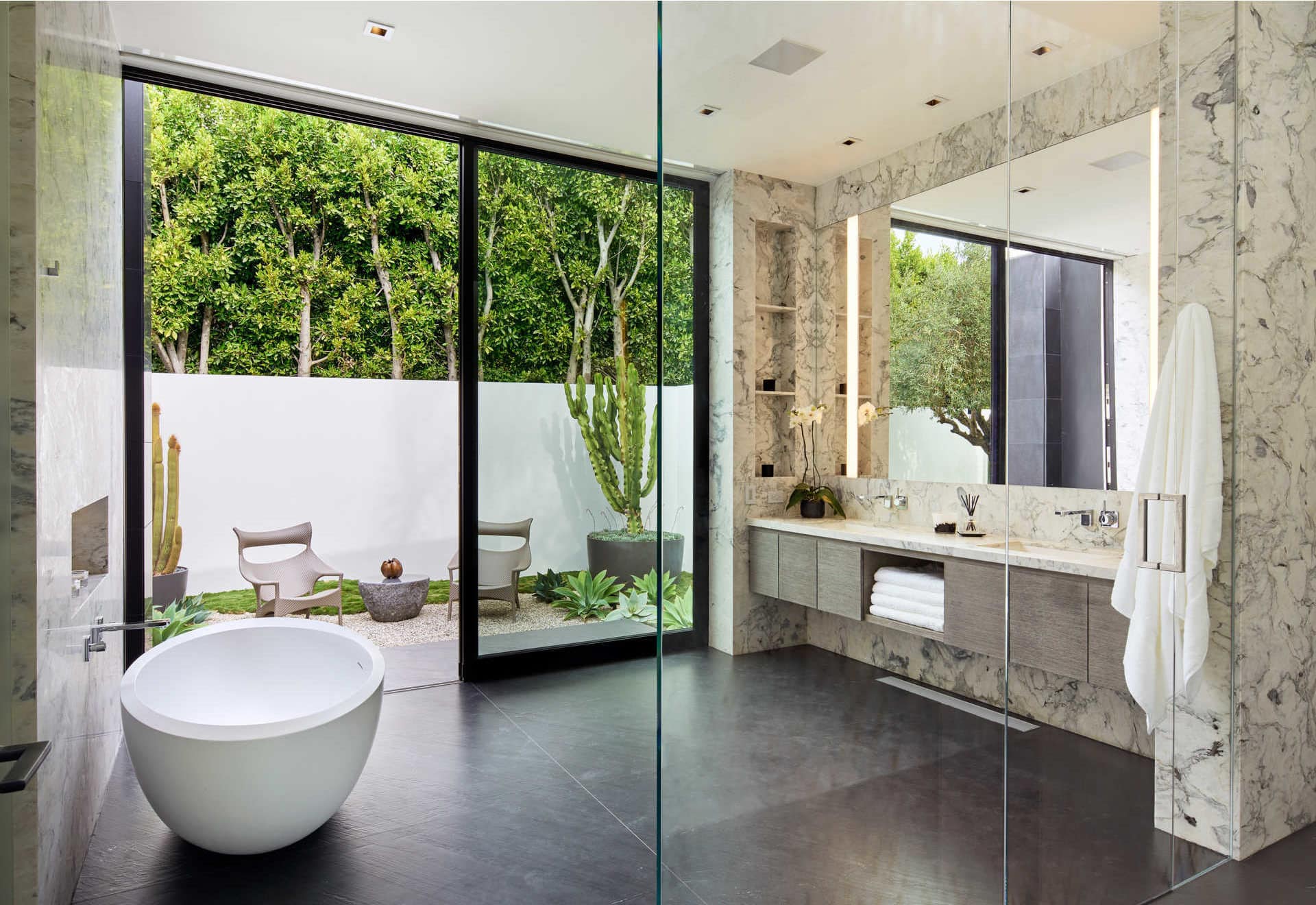 “Don’t mind me dear, I’m just staring at our bathroom because it’s so insanely beautiful.” 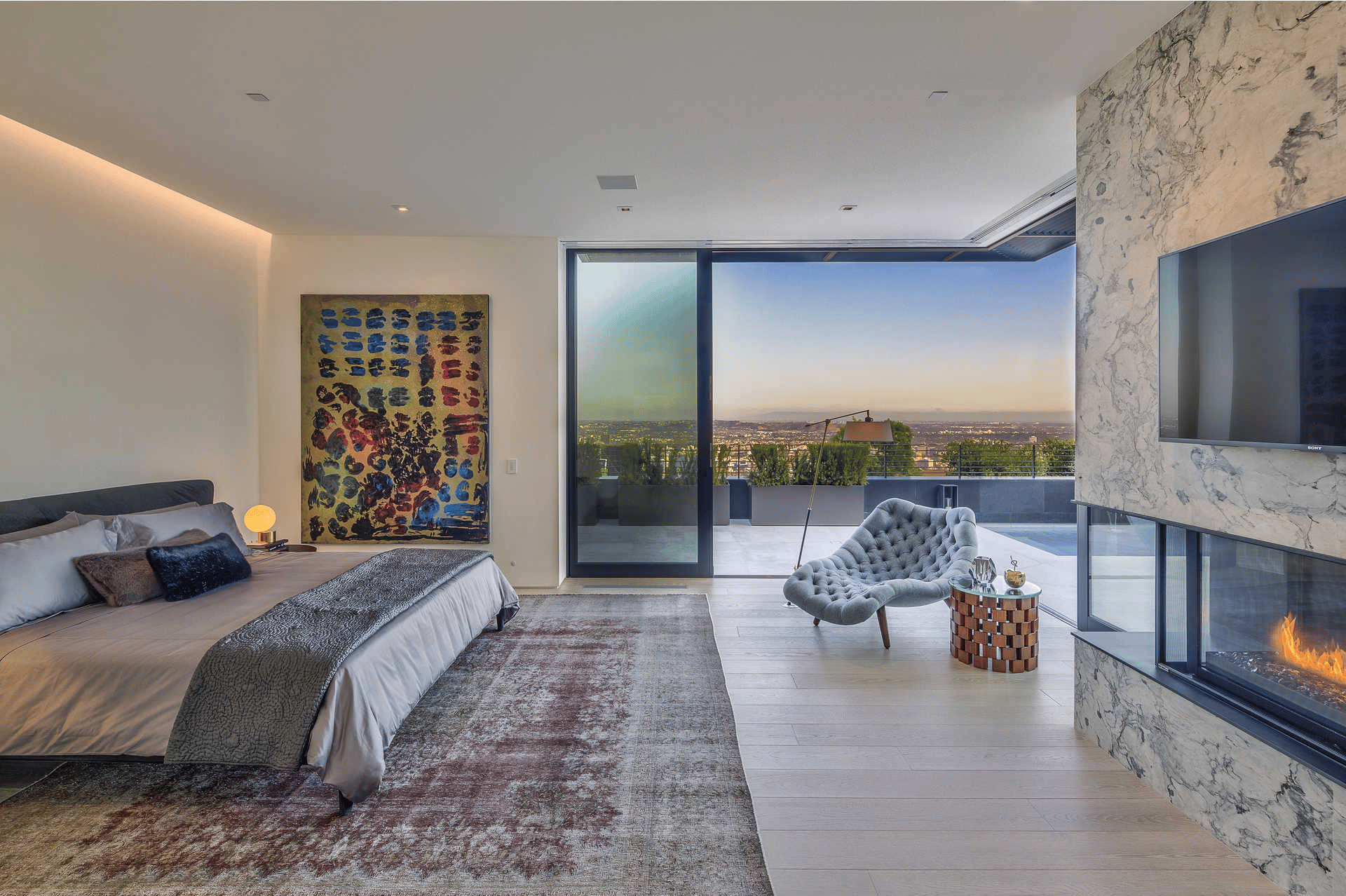 The master bedroom has the best of both worlds. You’ve got your (multi) million dollar view and pool on one side, and a nice cozy marble fireplace on the other. I can’t help but feel like they should have put a painting over the bed instead of on the far wall to anchor it better though… 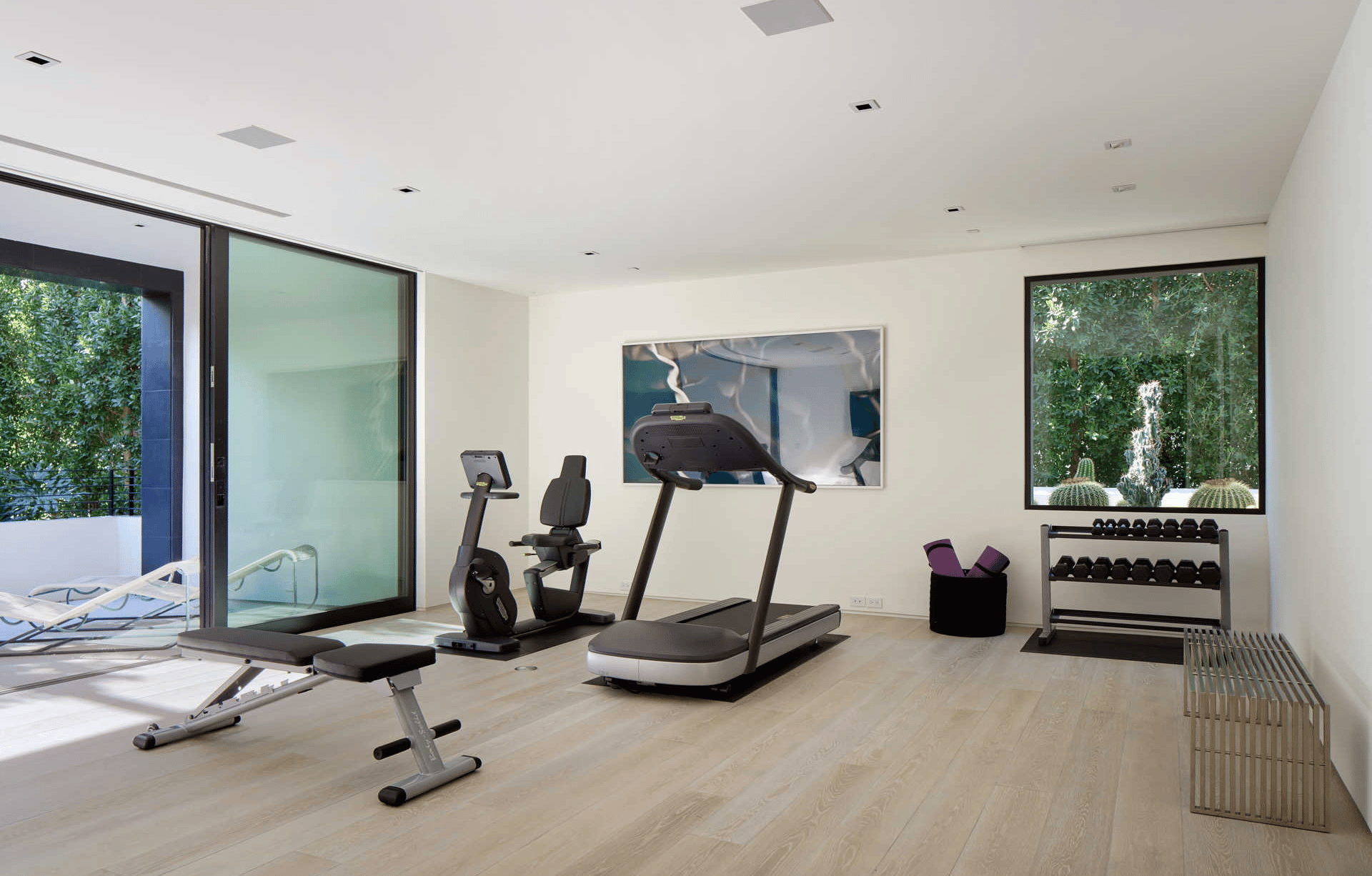 The gym is nice enough to make me wonder if cutting out the tecate and tacos and going vegan would make me feel better…Well, probably not, but it would make an amazing office.

Of course, if this was my office you’d get nothing but long flowing prose about how nice my house is once a week.

If this sounds at all appealing, we can always start a gofundme to get me into this place. 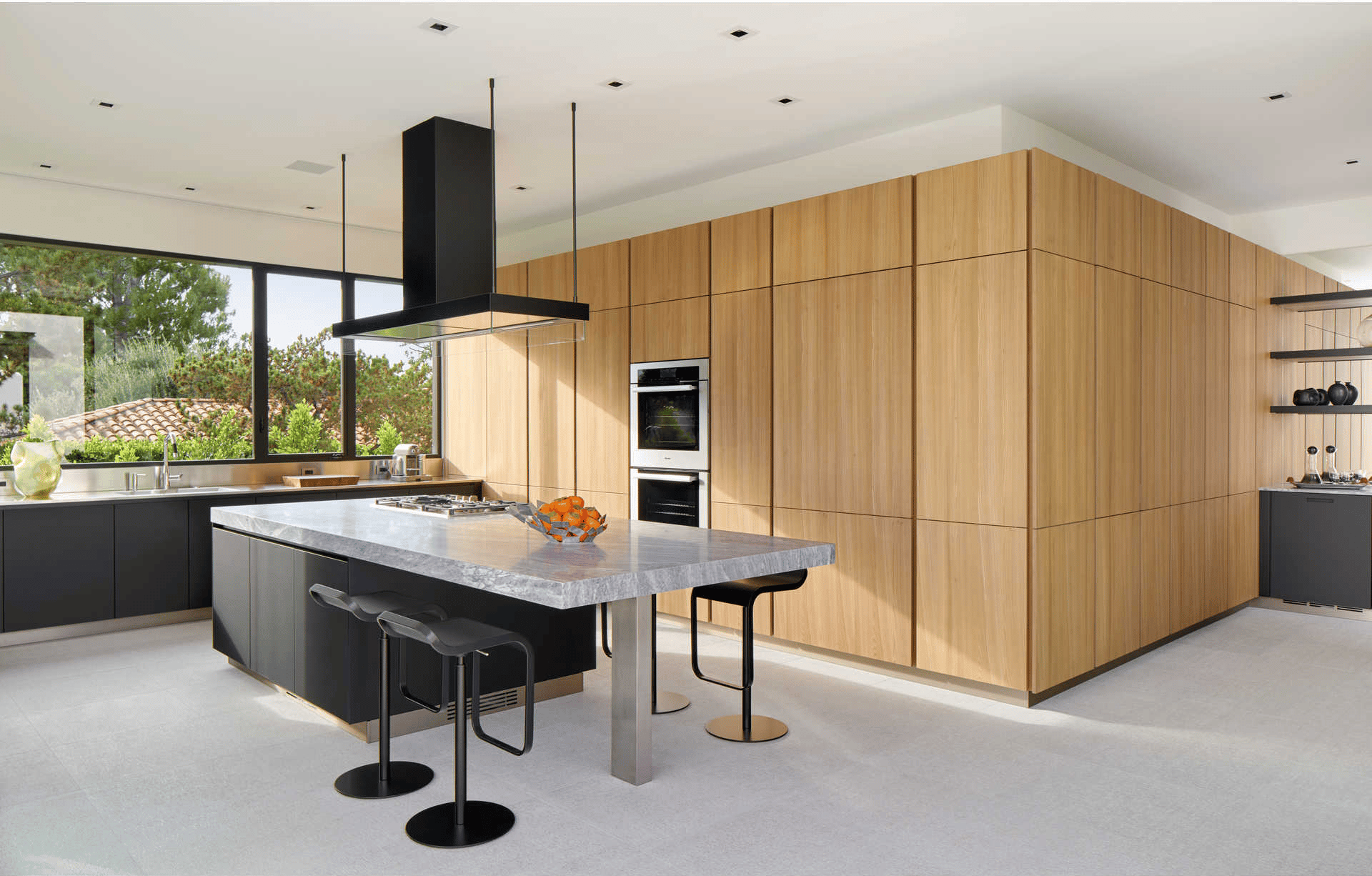 Before you click over to gofundme, we have to talk about the kitchen. There’s a lot to like here, it’s got some serious mid century vibes and flows right into the rest of the house. That said, the leg on that cantilevered counter just doesn’t sit right with me for some reason…

An easy fix for sure, and I could be thrown off by those awful piston stools, but this and the tile are two things I would have to have a huddle with my architect over.

Well, I’d also get rid of these boring beige daybed things on the back terrace and replace them with some curvy vintage rattan with bold printed cushions. 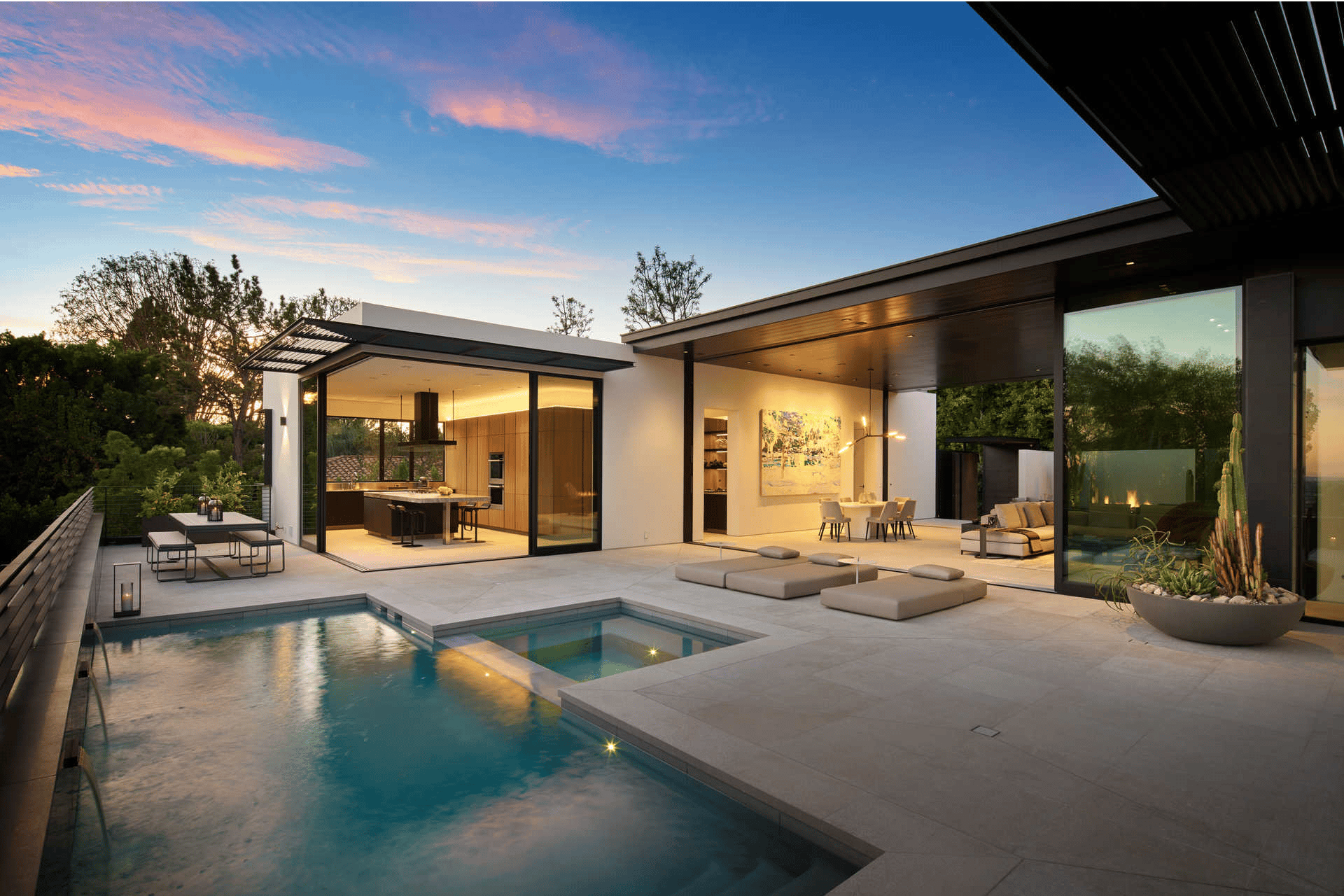 A pair of these guys would do the trick: 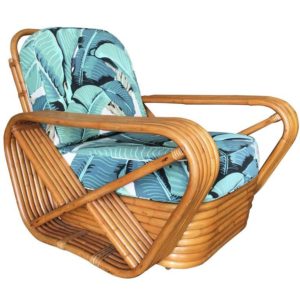 Note: after consulting with the rest of the office, I’ve decided that the gofundme idea is a bit… ambitious. Still, some creative budgeting just might get me into this place before it sells.

Feel like crushing my dreams and telling me how much you hate this place? Or, have a better listing of the week you think we need to write about? Let us know in the comments or reach out on Twitter @_theclose